Yesterday started out BAD!
I was leaving home and in MY OWN SUBDIVISION.....I got my first speeding ticket. 31 in a 20!
Anyone else have a speed limit of 20! Its not even 20 in a school zone.
Anyways...
The officer was a complete JERK. He was entirely wrong in how he talked to me. He was asking all sorts of questions that I thought were useless and in a mean tone.
I know what you are thinking....suck it up, right?
Well, I had an accident, rear ender,  BUMP back in September of last year, in which I barely ran into another car at a red light.
I know this doesnt seem to be a big deal....but in MEMPHIS it is. You see, I hit a women with 3 children in the car.
Yeah! I know. Totally the wrong car to hit.
To make an ENTIRELY long story short.....they claimed injuries and got $47,000.00 form my insurance company! And it has definitely changed the way I try to drive...
Earlier this week I had gotten a letter from The State of TN stated that I had 7 points on my record for that accident alone, and I only have to get 5 more before September for something bad to happen.
So back to the speeding ticket....thats another 3 points! So to say that I was upset was an understatement! I was sobbing! And...the mean officer didnt help!
Now on to the Good!
My sweet, awesome, best ever, handsome, caring husband sent me these at work! 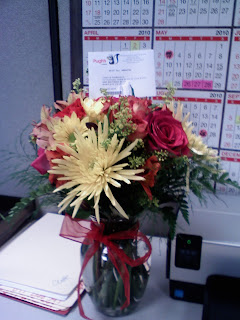 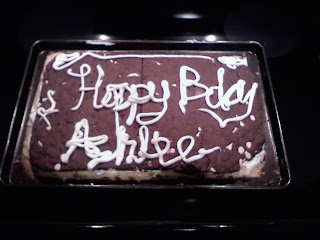 My birthday isnt until the 27th, but he made it early!
See...told you he was the BEST ever!
Its a double layer cookie cake! He is so creative.
The  bottom layer is a chocolate chip cake, and the top is a chocolate with white chocolate chips with vanilla icing in between!
I will post the recipe later.
Now, to wrap this up!
I hope you all have a great day, And ME...
I am going to go 20 miles an hour through my subdivision! =)

I'm sorry you had the beginnings of a rotten day!

OMGosh...they gave you a ticket for only doing 11 over? Sheesh! And talk about taking advantage of you with the accident...some people will do anything to get a little money out of someone.

Big hugs for a better day! Gotta love that hubby wanted to do something nice for you!