Warning: Tons of Photos
Day 3: We woke up last Saturday morning and we were alrady docked at Cozumel. 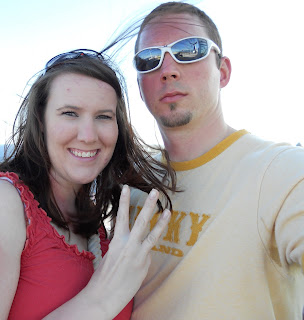 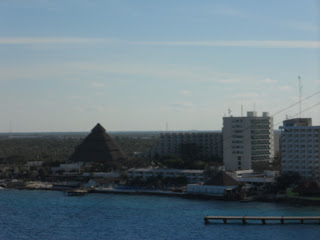 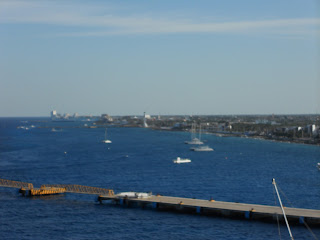 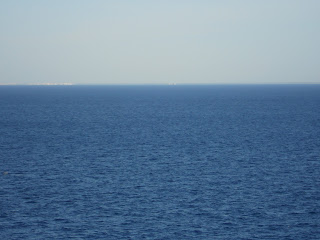 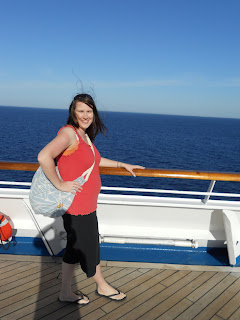 While we were waiting for our ship to clear the coast guard, we saw a Royal Caribbean Ship making its way into the port﻿ 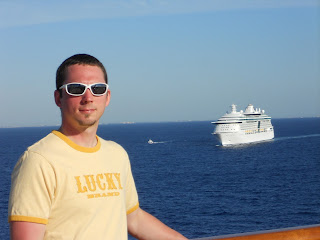 We got off the ship and Three Amigos is one of the famous grill and cantinas at the end of the pier. This is always the busiest place right before the ship blows its final horn signaling to get back on!!
The waiters can carry several margarita glasses on a tray on their heads. 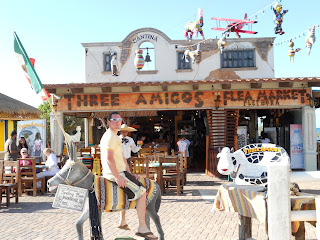 I love thus pic. Its just an old tiled stairway, but I loved the colored in it.
Perfect for our living room.﻿ 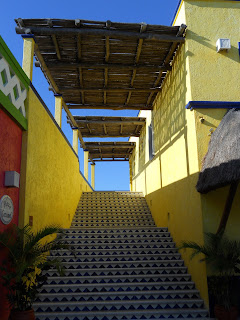 I knew that I wanted to get a bracelet made with Levi's name, but oddly enough, they already had several to choose from in the marketplace.﻿ 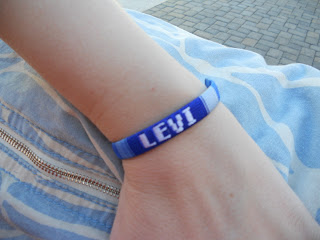 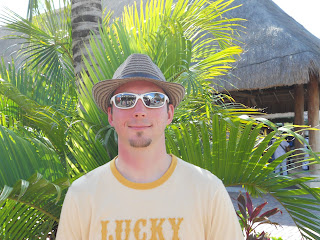 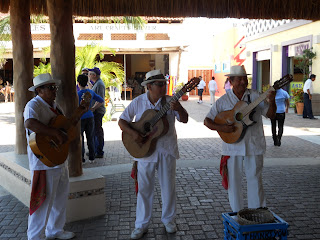 We docked at the Puerta Maya pier﻿ 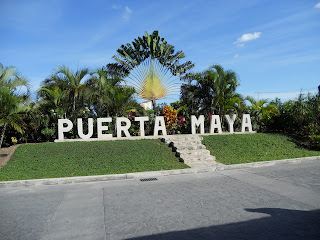 We grabbed at taxi and took us to Nachi Cocom, the beach resort that we had booked for the day.
We got our own palapa 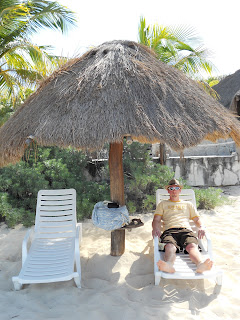 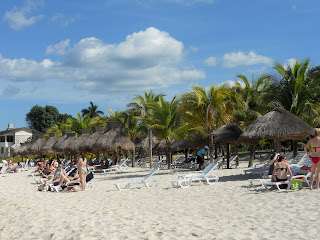 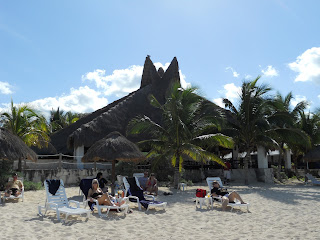 We had absolutely gorgeous weather, which totally surprised me since we had only been in April and August in the past. The temp was in the 80's, and the water was so nice and crystal clear.﻿ 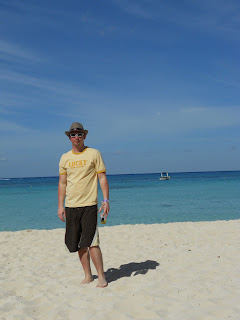 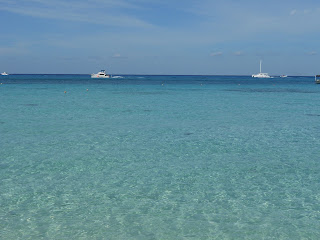 Levi's name in the sand.
This was an adventure. If the waves didnt get to it first, then our shadows were in the way.﻿ 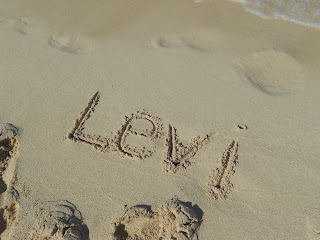 Me and Daddy to be﻿ 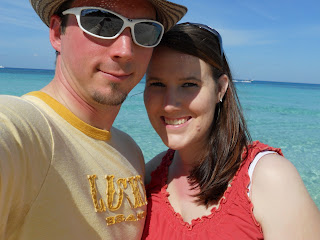 Playing "shuffled row" on my Kindle.
Matt and I go back and forth trying to beat each others scores. 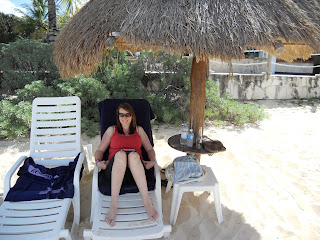 We each got a three course lunch (included in the price)
It was so much food, and delicious.
We opted out of the third course =)﻿ 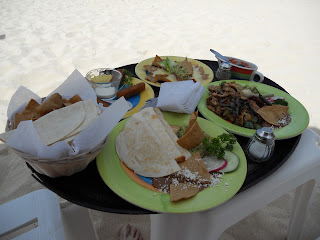 I was covering my face because the people next to us thought it would be funny to smoke one of their disgusting cuban cigars.
It wasnt funny. 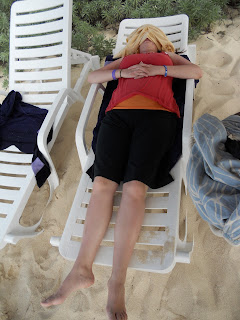 After Nachi Cocom, we always go to Pancho's. Its also at the end of the pier, but not nearly as crowded. And....it has hammocks, one of Matt's favorite things.
We always order quesadillas, but this time we ordered taquitos
AND
Fresh PICO!!!! 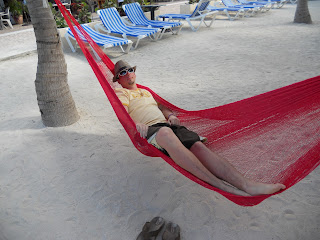 This is the view from Panchos. It makes me feel better to see the ship once the time gets close to get back on. Our ship is behind the other one. 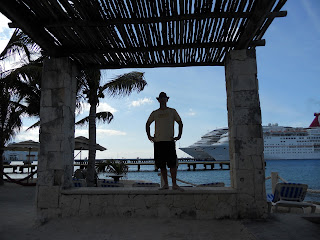 And this pic is out of order.
(it was takin with our phone) 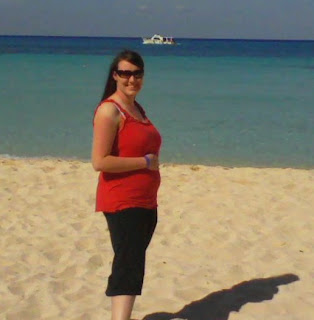 Day 4
We staying in almost all of the last day.
Matt was pretty burnt, and I didnt need anymore sun. 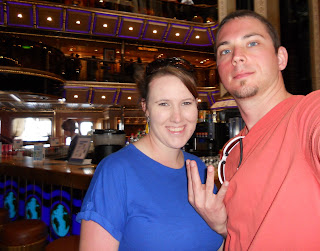 We sat in on Bingo.
Watched a kids talent show.
and ate.
That night, we went to a show called "big Easy"
it was a tribute to New Orleans. It was fabulous! 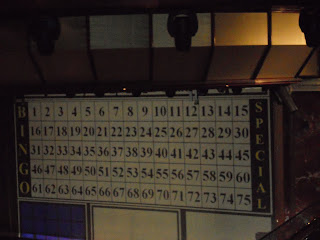 The last night before dinner. I made a towel creation (no pic) for our stateroom steward and we put a tip in an envelope on the towel animal. I made a sting ray...it wasnt good.
He obviously thought my creation was funny, because when we got back that night.
He showed us up.
This is his version.
It made me laugh! 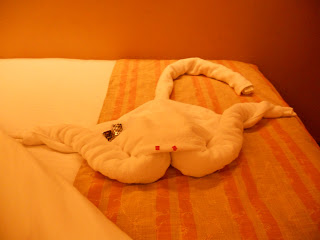 Ok. That was our babymoon.
We didnt take alot of pics of the cruise ship itself, we just wanted to relax most of the time.
We enjoyed being with one another and knowing that in a few years, we can begin traveling with our sweet baby boy.
Posted by Ashlee
Labels: travel

In a few years maybe we can take a family Disney cruise. I'd have to work myself up to wanting to cruise but it would be fun.
I am ready for a vacay just me and Tim. It has been since NYC (I think) that we have had time just the two of us.